A week ago I had the pleasure of attending a great Guardian Live event, tackling climate change, an evening with Christiana Figueres. A friend of mine Evie, owner of Atlas and Ortus couldn’t make it and kindly gave me her ticket, so I thought it is only fair to write up what was discussed for Evie and whoever else is interested to read. Let’s dive in.

The talk was with the UN’s top climate change diplomat Christiana Figueres, who helped to deliver us the groundbreaking Paris climate change deal. Now she is dedicated to getting the world on track to beat global warming before the crucial date of 2020. The challenge remains enormous, but if anyone can make the impossible feel possible, it is Christiana.

Extreme weather is already battering communities around the world and the Arctic is melting. We know this threatens huge consequences for us all. Which means we need to act now with a sense of urgency but without panicking, as fossil fuels still burn high and mighty, and the world population continues to rise.

Then one of the biggest polluters of all, America, pulled back from global action under President Trump’s Presidency. The question we are all asking is, can we mobilise fast and effectively to meet the demands the agreement has set, and change the world we live in for the greater good?

After hearing Christiana talk on the subject for 45 minutes, it seems plausible. Hard work and commitment is of course required, but I left feeling uplifted, that we have some great powerhouses looking out for us and the planet. Due to Christiana’s optimism, energy and charisma she enabled 196 nations to come together in agreement like never before.

She answered every question asked to her immediately, in a punchy manner, with hard facts and rapid conclusions, and sometimes laugh out loud humour. Don’t let this humour fool you though she is intensely focused on the task at hand.

In her introduction from Damian Carrington, the Guardian Environment Editor described her as irrepressible. Often when attending a talk about climate change you expect to leave feeling depressed and helpless, but we were assured Christiana’s stubborn optimism would leave us feeling positive, and Damien was right.

Everything Christiana said was a mic drop moment so I ended up making about 10 pages of notes. I will try to best summarise the event for you all now.

There were quite a few mentions about President Trump, as always he seems to crop up in most conversations these days. He made the decision renege on the agreement that was originally signed and shocked the world. Christiana had many great metaphors to describe how backwards this action was, best summarised by the simple fact that he will get left behind by doing this. Stood on the hard shoulder of a moving freeway, while we all surpass him into the future.

The US federal government has the standpoint that does not support the future of the global economy, and many of the states senates do not agree with him, declaring that they will keep efforts up to minimise carbon emissions. Christiana likened Trump’s actions with the idea of switching back to landline phones instead of moving forward into the 21st Century. No one wants that.

Climate change denial is a very expensive game to play. Have we not all been taught our whole lives the simple idea that prevention is much cheaper than the cure? It is true in the case of climate change, true in a financial sense and humanitarian. Making progress now is crucial “The investments that we’re going to make globally over the next five, 10, maximum 15 years, but certainly the ones within the next five years, will determine the quality of life of future generations,” she says, “as simple as that.”

The whole way through Christiana was perfectly charming and I felt safe knowing she was working to get the issue under control, she has the power to bring the whole audience around to her way of thinking. Making stubbornness seem like a positive trait, stating, “it is fine to be stubborn when it is for the greater good, necessary in fact.” Reiterating the fact we all know to be true, that we can’t afford to not act now. We can not afford to be pessimistic.

Christiana is right, we need to tackle the problem with optimism and conviction. Currently, we have the power of science behind us if we use it to our advantage. She highlighted how this is a global problem and that sometimes it is easy to forget, this is the main thing we all have in common. We share one planet so we must share the responsibility to improve our planet and ourselves, together. Without punitive measures, but through understanding. It is in every countries best interest to act, which should be our most powerful motivation.

The reoccurring theme of the night was the talk of how collaboration can save the world. Reflecting on the confrontational approach that Trump has shown while in power helps us see that this is not in fact helpful. This style of diction will not get us anywhere good. The way the Paris agreement was reached was through understanding. Understanding of the task at hand and all of our differences, and embracing them.

Christiana invited us to imagine a world that thought differently, competing countries attitudes for a long time has been to think, your loss is my gain. This is no more, now we all win together or we all lose together. (One of the mic drop moments.)

Christiana went on to praise figures like Pope Francis, he is a breath of fresh air when it comes to religion, calling out to followers of the Catholic church to understand the consequences of ignoring climate change and to embrace science, as well as religion. Below is a nice quote from him.

All that being said the Paris Agreement is about more than the niceties of working together. It sent a message around the world, that successful business of the future would need to have strong economic values if they are to succeed.

Supporting climate change has the added value of improving our economy, by banking on our long-term future, which is something we can all agree needs to improve. Christiana proclaimed that business holds the leaver for innovation as technologies are opening up many exciting investment opportunities. By learning to correct the errors we have made in the past, we have the power to be truly innovative again, and that is an exciting idea.

Other topics that were covered:

Insurance companies are pulling out from coal insurance as it is becoming too risky. Investments in renewable and sustainable industries are on the rise as investing in the future makes more economic sense.

There has been a dramatic drop in renewable energy costs, making renewable energy sources more accessible for us all. Now renewable energy suppliers are coming to the forefront as a viable option for everyday homes. Realistically, the more people switch to renewable sources, naturally, the cost falls. Christiana said that although the amount of energy we can get from renewables is limitless, it should still never be wasted.

More good news, car manufacturers are coming out with more and more new modern electric cars due to the success of Tesla. Countries like China and India have set dates when all car sales will be electric and hopefully all charged by reusable sources. This goes hand in hand with the fall in popularity of Diesel cars. London is soon to ban them, which I am sure will improve the air quality ten fold.

The last point I will cover in this article, although there were many subcategories discussed, was how gender has a big role to play in regards to climate change. Many women are stepping up to the challenge to turn back the damage general masculine catalytic behaviour has created.

Christiana communicated tactfully that it is not to say that men do not have the sensitivity we need to tackle climate change, but that these traits do generally come to women naturally. Often women have the ability to think with more long-term goals in mind, which is vital in this conversation. This is not a criticism of men, rather an observation of the stereotypes we have been bound to in the past and in the case of climate change this topic plays to the stereotypical strengths of women. Perhaps also acting as a challenge to reflect on business and gender.

Some excellent questions came from the audience, some people hogged the mic and rambled a little but it only proved to show the passion the audience felt for the subject matter.

When asked who should take responsibility for the changes we need to make, Christiana said that she highly appreciates anyone who takes the time to share the message about conquering climate change.

The responsibility is not just left up to our governments, of course, they hold the key to making the biggest change, but we have the ability to hold them accountable. She said, “change can truly be made by the people and everyone who can, should do their individual bit.” Then asking us all to invite everyone we know to do their bit. Reminding me of the Margaret Mead quote below, but imagine it on a much bigger scale! 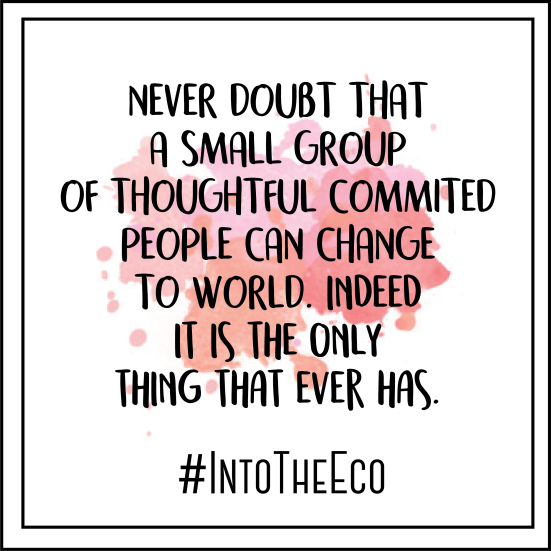 Lastly, I would like to point out that not only was Christiana totally inspirational, she was also still very humble, she wanted to make it clear that not one person can be credited with finalising the Paris Agreement, and many people helped to plant the seeds allowing ideas to germinate. Nice.

The final word of the evening was to “swallow the alarm clock” another illuminating metaphor describing a call to action, currently, we are advancing too slowly towards the goals set by the Paris agreement. Christiana says simply that the clock is within us all, and the time to act is now. Thanks for an inspirational Evening Christiana.

Thank you for reading, I hope you found this an enjoyable and informative read. If you want to hear more from us please consider subscribing to our platform, where you will receive post updates. We promise never to spam anyone.

If you don’t want to subscribe but you feel like helping us keep the conversation flowing, please share this article with your nearest and dearest and comment below to let us know what you think, we would love to hear from you.

We hope to have inspired a small change in the world through every blog post we write, stay positive.

If you want to know more about the Paris agreement follow this link to learn more. #BeyondParis #GlobalOptumism

Welcome Into The Eco